Travelling home and time to think ...

It is time to think about the passed two months. 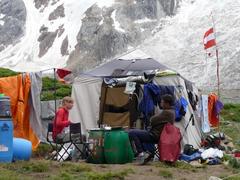 Packing on the last day (Clara and Karim) 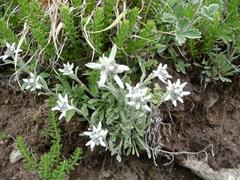 Edelweiss and many other flowers grow in the basecamp 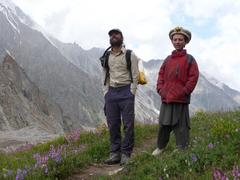 Markus on the trek down 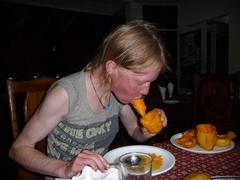 The (probable) first ascent of the NW face took over 50 days of hard work on the mountain and at least four month of intensive preparations in Austria before the expedition. We endured being connected by a rope for 20 days not being able to separate by more than 12m. The nights we spent in a tiny tent that only allowed one person to move at a time. We tried to reduce weight (our backpacks still weight up to 30kg) as leight as possible by often using only one sleeping bag.

Our expectations for this expedition were humble. We considered that not finding a way through the Diama glacier could mean an end before the expedition has even started. At the same time we knew that potentially we could reach the summit if we manage to take this first hurdle. When we started reaching goal after goal that we set ourselves the possibility of making it to the summit got closer and became very central.

Unfortunately, in the end we did not climb the summit and had to give up 400m below. Both of us feel some disappointment  but we are aware that there are many reasons to be satisfied with our achievement: We are probably the first ones who have climbed the NW face up to 7750m (at least our research has shown it, please let us know if you have more information on the climbing history of this route) and we managed this in a group of two past-time alpinists. We both lost more than ten per cent of our body mass, we are very tired, but we got home sound and healthy celebrating our success!

Thank you for the many emails and phone calls that support our decision to "play safe" and stop where we stopped! And all the congratulations of the people who understand the size of this undertaking!