The saddle at 7.750 m below the north summit is the place to return. The actual conditions do not allow to continue safely. 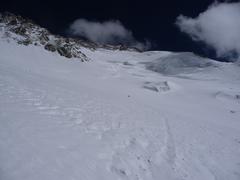 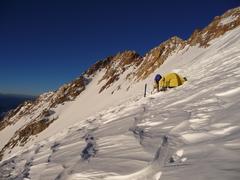 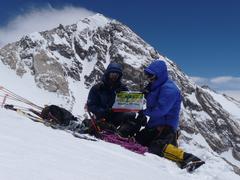 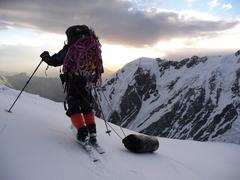 On the way down the luggage was enormous

Clara called again today, from the camp at 7.600 m. They finished their ascent at the saddle below the north summit at 7.750 m. The three possibilities for continuing the ascent were not promising. The direct ascent along the NW face using a steep snow field was decided to be too dangerous due to a lot of snow that has fallen during the last days increasing the risk of avalanches. Taking the north ridge was considered unsafe due to strong winds (70-80km/h). And, descending to the normal route that starts in the basin to the SW side (Bazhin) would have been a nightmare: while going down 400m of altitude, a re-ascent of the 400m would have been needed coming back up after the summit. Also, the alternative way of going down along the Kinshofer route was said to be difficult by now since the ropes of the other expeditions had been covered by ice.